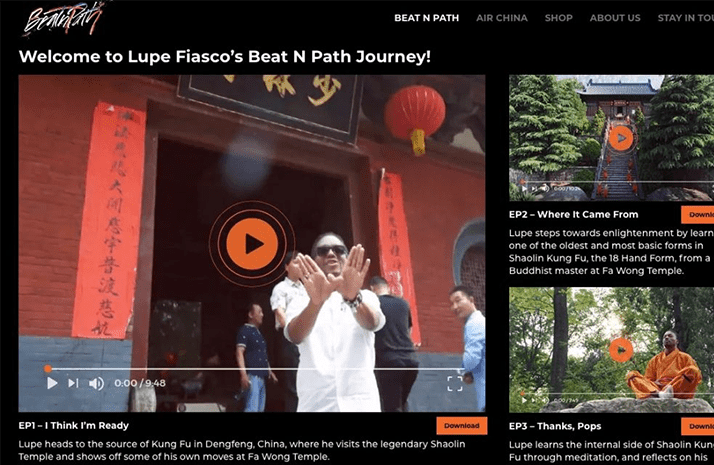 The premise of the series is intriguing – what would some of the world’s biggest stars be doing if they weren’t doing what made them famous?  Lupe journeys to China to discover his huge passion before rap: Kung Fu.

A little known fact about Lupe is that he has been training in martial arts since he was three years old in Chicago.   Together with Icicle and The Mustard Collective we were able to make Lupe’s dreams come true as he visited the hometown of his childhood wushu hero, Wang Ziping.

With a late green light meaning just two and a half weeks available for research and coordination, Mandarin Film worked with Mustard to create the story line, cast the characters and secure all (very various!) filming locations. The filming took place across three cities in eight days, with a 10-person crew scurrying through four train stations.

Mandarin Film secured exclusive access to diverse locations, including the largest Mosque in Cangzhou, the Shaolin temple in Dengfeng, Beijing’s Temple of Heaven and seven other locations.

Lupe trained in everything from the mainstream to the esoteric: be it a Muslim Sweeping Feet and Fist form, the original Shaolin 18-hand fist form, and Internal Fist, a form of internal martial arts.

Our favourite part was accommodating Lupe to receive a bespoke traditional Chinese sword made just for him at the forge of one of the very few master sword makers left in China.  An incredible memory and an incredibly major headache getting it back to the US for Lupe!

Besides martial arts, Lupe also collaborated with a leading Chinese hip-hop artist on a piece about his trip to China. Was Lupe up for the martial arts challenge? What does a US/China rap battle sound like?  You will have to watch and see…. on Netflix